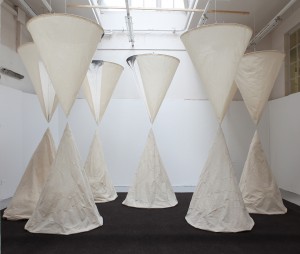 In 1922, during a highly publicised debate in Paris, Albert Einstein met the philosopher Henri Bergson. Prior to the meeting Bergson argued that time should not be understood exclusively through the lens of science, he believed that time was subjective and human perception of the lived time was a real component of the world. Einstein’s incendiary opening statement ‘The time of the philosopher does not exist’ set the tone of the dialogue and created a gap between the two thinkers. For Einstein time was mathematical and measurable, resistant to control. He argued that time and space are not two separate entities and coined the term space-time.

The light cone is the mathematical representation of an event moving through space-time. Every event has an associated light cone. The lower part, the past light cone, collapses into a single point and expands again into the future light cone above. In between there is the hypersurface of the present.

This work opens up the space for a form of fusion between the scientific and the philosophical understanding of time and draws attention to that hard to define, elusive hypersurface of the now.